Disruption and Active with Passive

Getting Active with Passive Investments

The battle between active and passive investing has been a topic for years.  There are arguments for both and there are varying ways to successfully deploy these strategies. I have blogged before about the proliferation of ETFs and that many investors seek ETFs because they believe they are passive, but in many cases the ETFs they are investing in are specialized and, therefore, not passive.  There is even a whiskey ETF, which I blogged about back in October. Not only are people investing in non-passive ETFs, but they then trade in and out of these not-so-passive ETFs, thereby executing a very active approach.  I have yet to meet an individual investor who successfully held passive ETFs through a bear market without making changes or reacting emotionally at the wrong time.  There are some truly passive ETFs in existence, but as the table below illustrates, even those are not being used as passive investments.  SPY, which is the best known and a truly passive ETF has an average holding period of only 15 days – investors are using this to adjust market exposure on a short-term basis. 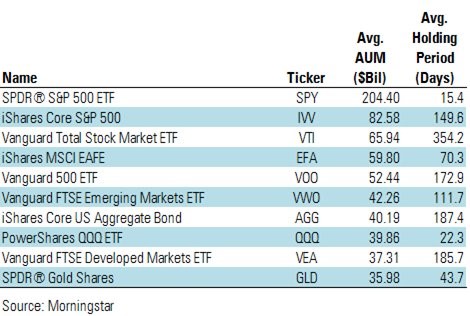 There is no denying the widespread disruption that Amazon has caused.  They have sent shockwaves through numerous industries including retail, media, cloud computing, and others.  This week there was an article about their latest victim, a large industrial parts distributor (Read here).  The chart below shows just one facet of Amazon’s offering, Amazon Prime.  Already, more Americans have Amazon Prime than go to church monthly or even own a landline phone.  More broadly, this is not just about Amazon.  Amazon is only one example of companies using technology to disrupt traditional businesses and change the way we live our lives.

In a Video I watched today related to the Amazon entry above, there were also a few retail facts that you might find interesting:

From 1970-2015, the number of mall grew twice as fast as the U.S. population
From 2010-2013, mall visits dropped 50% and have kept falling ever since
Since 2010, Amazon has grown revenues equal to the topline of Nordstrom, Sears and Macy’s combined.

Continuing Jobless claims continued lower last week, according to a report released from the Department of Labor today.  This trend has been very consistent since the 2008-2009 recession and on a per capita basis is the lowest it has been in at least 40 years.  You can see from the chart below that reversals in this trend are highly correlated with periods of economic weakness, so it is good to be aware of which direction this trend is heading.  I wonder how much further it can go, and have been wondering that for a year now.  I also wonder when, or if, we might start seeing this series tick up as a result of technological advances taking over factory, restaurant or other jobs. 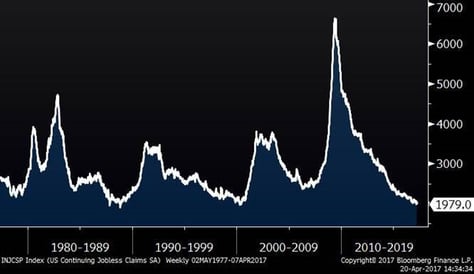