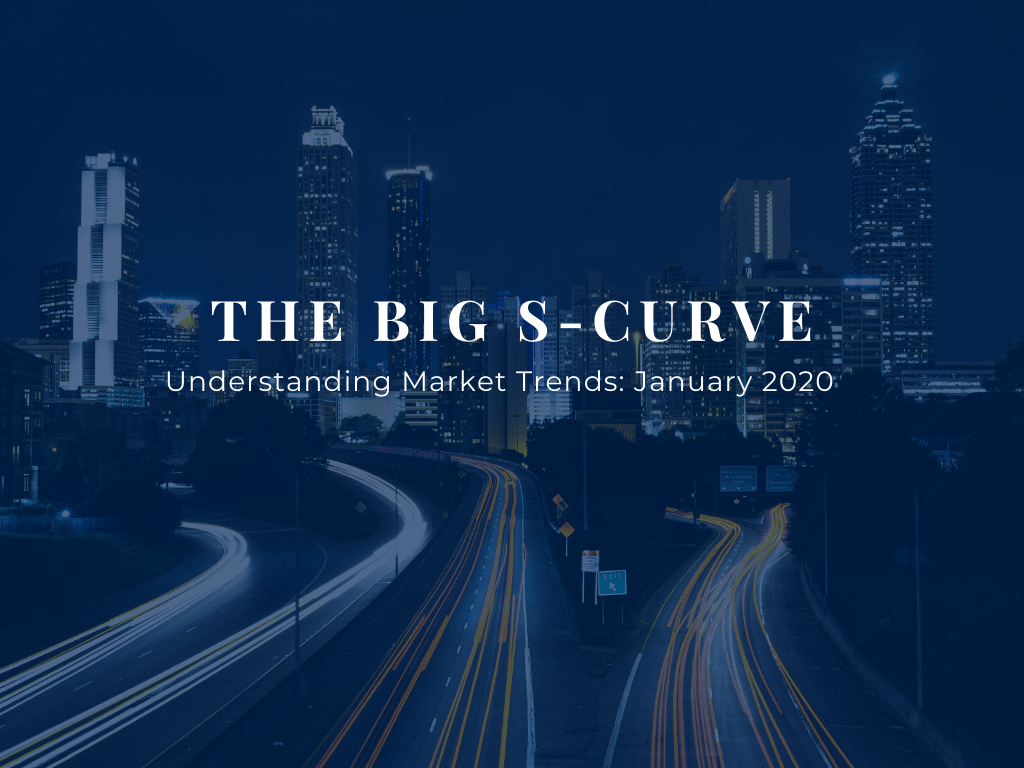 The most common things that typical market observers are currently worried about (partially fueled by the media) revolve around politics, the trade war, interest rates and the timing/depth of the next recession.

It is much less common to hear someone talking about the potential positives. Fears like this are nothing new, and in fact, I cannot remember a time in my career when there wasn't a slew of fears to worry about.

In today’s environment, these emotions are exaggerated by media headlines. The market tends to gyrate more than in the past on these emotions. This is because of the ease of trading and the proliferation algorithmic/ETF strategies. Although it is not highlighted much (scary things attract a lot more eyeballs and clicks), there is a really important long-term secular trend happening under the surface, which is becoming known as the Fourth Industrial Revolution.

The Rapid Pace of Change Today

We are living in a period of unprecedented technological change. Many believe that what is transpiring with technology (Artificial Intelligence, Big Data, 5G, Cloud Computing, etc.) is revolutionary. Some believe it is on the same scale as the Industrial Revolution or even the invention of electricity.

Technology is drastically changing the way we live our lives at an ever-accelerating rate. Broadly speaking, technology is enabling companies in all industries to grow faster, innovate better, lower costs, and making it easier than ever to start a business. These are all qualities that are good for companies and the economy, and therefore good for stock prices (for the disruptors, not the disrupted) over the long-term.

This is a likely to be fairly long-term and sustained trend with a magnitude and slope like we have never seen before. There are more sustainable s-curved opportunities than ever, many of which are still in the early innings.

Knowledge is growing at the fastest pace ever. We have created more data in the last three years than in all human history prior to that. Now we have the computing power to not only create that data, but to derive insights from it. This revolution has broad implications across all sectors and this phenomenon accelerates every day.

The lives of the next generation will look dramatically different than the lives of our parents or grandparents – never in human history has change this rapid occurred.

What Is an S-Curve?

So how does this relate to “S-Curves?" In its most simple form, an S-Curve is something that starts off slowly then accelerates rapidly until it matures and slows down, like the image below: 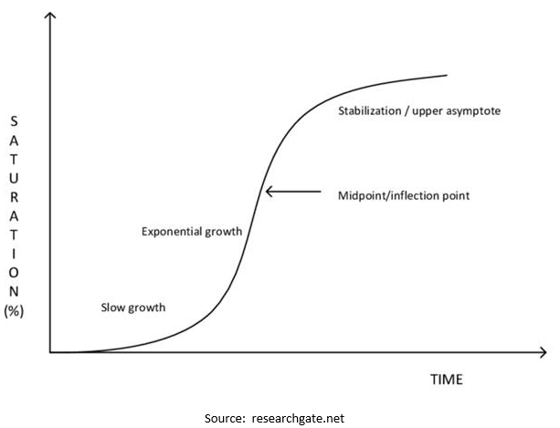 S-curves occur in nature, like in how humans learn. Think about when you learned math. It was very slow at first, then all of a sudden you “got it," and then your math ability accelerated rapidly until it stabilized again. At that point, most of us learned algebra, which followed a similar s-curve, then geometry, etc. Most of us stopped at calculus or before that, so we missed out on some really great s-curves that followed.

Consumer adoption rates follow s-curves too. Some recent examples would be smart phones and computers. This has been happening for a long time, albeit at a slower pace. Automobile, TV, and telephone adoption among others followed this same curve. Below is an illustration of these adoption curves: 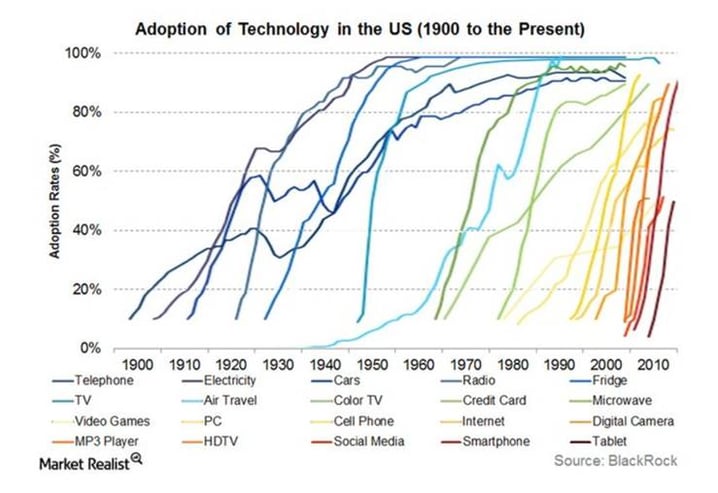 In the Industrial Age, we have experienced this three times, and are now on our fourth. These were driven by the steam engine, then electricity, then computers, and now digitization. Each of these revolutionary s-curves was built upon the last, just like your transition as a kid from counting to arithmetic to algebra to trigonometry to calculus.

What Does the S-Curve Mean for Us?

Today, we are in the early innings of a Fourth Industrial Revolution where we are building on the other revolutions and becoming digitized and connected.

This new technology age is dramatically altering the way we live our lives. It is driven by things like artificial intelligence, cloud computing, advanced data analytics, robotics, and others. One aspect of a macro S-curve like the one in which we are living is that it spawns many more specific S-Curves. A few examples of these might be:

When we look back at periods when the greatest wealth was created, it is not linear – it is very “clumpy." These clumps happen to coincide with the aforementioned s-curves. Think about Vanderbilt, Rockefeller, Carnegie, Ford, Getty, Gates, Jobs, Bezos and all of the others. They mostly grew their wealth at the same time as their peers due to the same s-curves.

It is easy to become caught up in the fears of the day, especially in an age where the media is ever-present and the stock market seems more volatile than usual.

While these fears may have merit and should not be completely discounted, it is equally important to consider a bigger and longer-term picture.

Is it possible that when we look into that bigger picture that it may depict something more powerful and more positive than we expect?

Do you have thoughts or questions regarding this article? 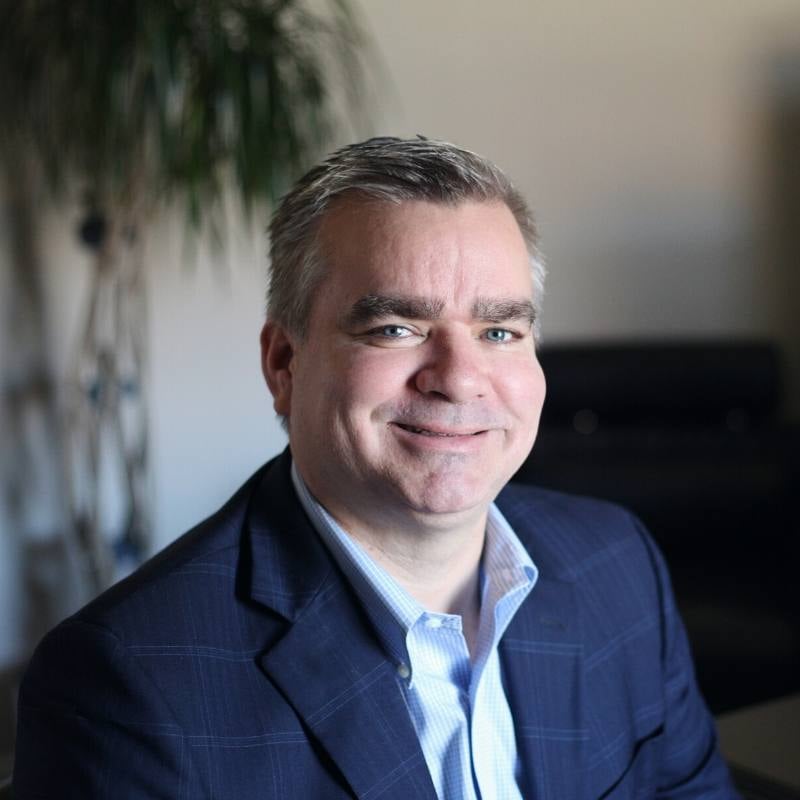