Trust the Process: Volatility is Normal 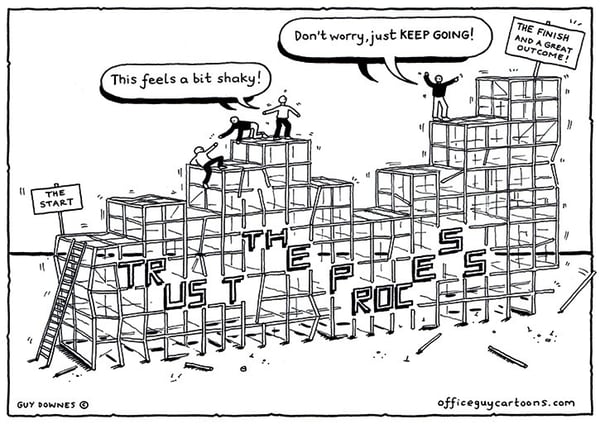 The last few weeks have been a little unnerving for those invested in the stock market. The media constantly bombards you with reasons (trade wars, higher interest rates, China) as to why the market is falling. Of course, it’s important to know why but understand that we have little control over the variables that make markets move.

Volatility is normal in the stock market and we’ve been somewhat lulled to sleep over the last few years. If you consider that 2017 was one of the least volatile years ever in the history of the stock market, you’d expect some sort of mean reversion. Consider this, we’ve had 10 days in 2018 with drops of 2% or more in the S&P 500. There was a total of 11 between 2014-2017.

Market drawdowns are painful and not easy to stomach. Computerized/algorithmic trading along with the amount of dollars in ETFs being traded exacerbates declines in the market, creating “air pockets”. According to Michael Batnick of Ritholtz Wealth Management, the S&P 500 index has experienced two separate 10% declines in the same year while previously reaching a new intra-year high. The last time this occurred was in 1990 and this is the second time this has happened since 1960.

Stock market declines can be viewed as an opportunity.. People often ask: “Is this the bottom?”, “Is this the top?” “Should I get out of the market?” There is no one signal or signals that give you the all clear on a market top or bottom. What we can control are the following:

Having a long-term time frame puts anyone who invests in the market at an advantage because they can focus on the key assumptions as to what makes you wealthy: saving and compounding. The more you can save and invest, the higher your odds are of reaching whatever financial goals you may have.

This seems counterintuitive but when the stock market falls like it has been recently, it should be welcomed by those who are in the workforce (think retirement contributions from your paycheck), younger people (longer time horizon) and those who have or are saving. If you are none of the above, it gives you a chance to re-allocate your portfolio towards asset classes that are cheaper and potentially have more upside. With market corrections, you get the chance to buy stocks at cheaper prices, lower valuations and increase your odds of higher rates of return in the future. Since most people feel losses twice as strongly as they feel gains, it seems as if the stock market is one of the few places where people shy away from buying when prices go down.

It’s easy to call yourself a “buy and hold” investor during bull markets when most stocks are going up. Bear markets are really painful because of the large swings in the market, most of which are levered to the downside. You have days where the market goes up a lot and you become hopeful that the bear market is over, only to have more sharp declines later. Some shun and are uncomfortable with the notion of “staying the course” but it does payoff. Staying on-target with your asset allocation can be difficult during these times but trying to time the market is mostly a fruitless exercise. If you try to time the market, you have to be right twice, getting out at the top and getting back in at the bottom. You don’t need me to tell you this is nearly impossible. Consider the chart below from IFA (Investment Fund Advisors) which shows that not being in the stock market during its best days can be crippling to your long-term returns. You would miss out on 45% of the gains of the market from 1998 to 2017 if you were out of the market for its 5 best days. 5 days!!! 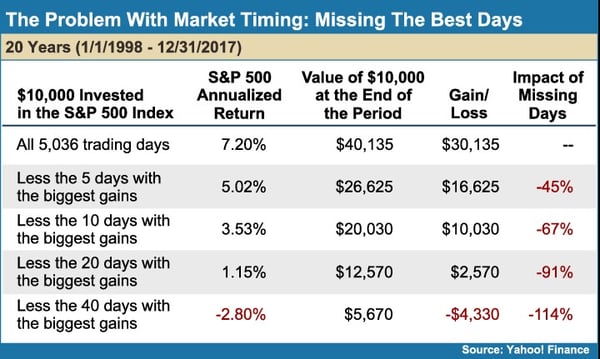 Even if this was the “top” of the market, below is an excellent chart from Nick Maggiulli which illustrates that even if you were the world’s worst “market timer”, you still did pretty well over a long period of time. The chart shows a hypothetical investor who invested $6,000 in the S&P 500 in December 1972. He then invested $46,000 that he saved over time in August 1987, right before the October 1987 stock market crash (stocks fell about 30%). He continued to save money for many years and in December 1999, he invested an additional $68,000 into the stock market. The internet bubble burst a few months later and stocks fell about 50%. He continued to save and took $64,000 of savings years later and invested it in October 2007, right before the Great Financial Crisis. This entire time, he didn’t sell his stocks, stayed fully invested and still had a portfolio balance of over $700,000, despite investing in almost every market top (he invested a total of $184,000). While this is not the most typical example, it illustrates how important it is to both save, invest and stay invested. 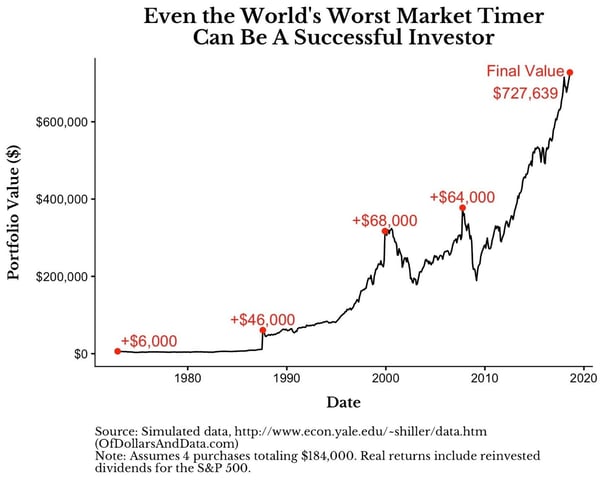 There are very few certainties in life but by sticking to your asset allocation, avoiding emotional decisions, saving and investing, you can increase your odds of achieving your retirement and financial objectives. It’s easier said than done but the numbers certainly make the case against market timing and for staying true to your asset allocation. Having an asset allocation you are comfortable with and fits your needs is more important than trying to figure out the impact a few pieces of economic data will have on the markets for the next week. I am not cheering for a market decline but taken from another perspective, they should be viewed as an opportunity to enhance your long-term returns. Even if your timing was extremely unlucky like our investor above, you did better than most would expect. When we work with clients, we have a process as to what stocks we select and how and when we adjust allocations. It’s important to take a step back and remind yourself that a sound process should produce good outcomes and even at times if it doesn’t, you should continue to “Trust the Process”. More often than not, you’ll be satisfied with the longer-term results.