Investment Risk and How We Perceive It 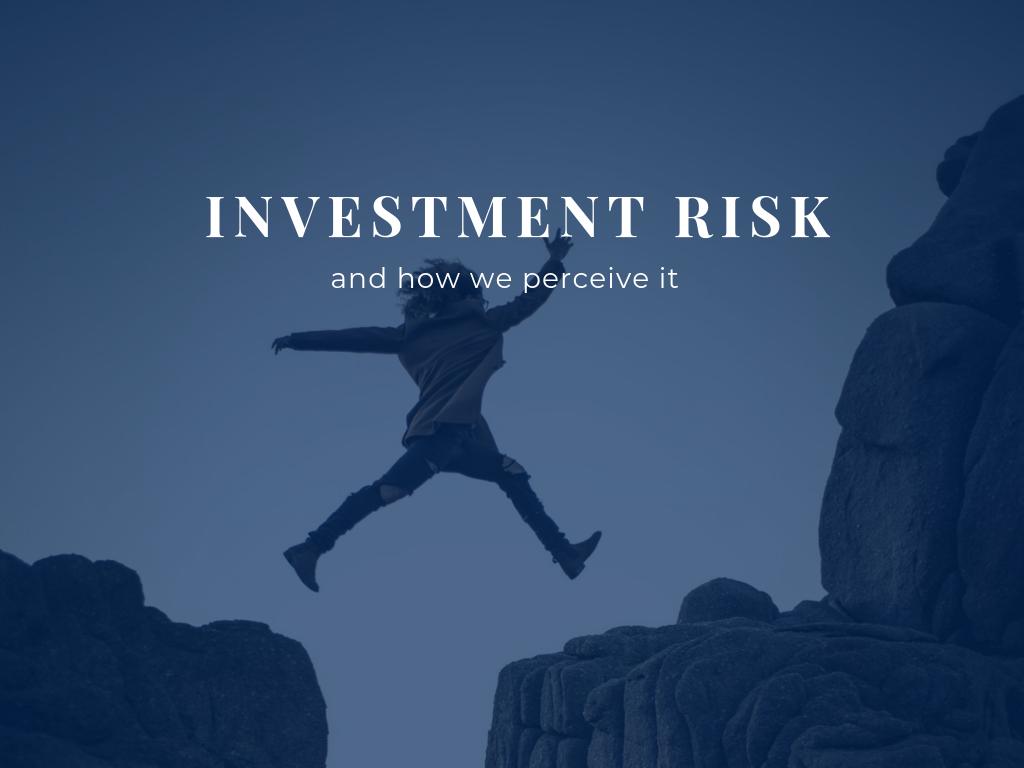 One of the terms most often heard in the world of finance is “risk” as in "investment risk." Often, people think of risk as something dangerous and to be avoided. There are many circumstances that determine how people view investment risk.

Below are some interesting ways to think about investment risk.

The past is a lousy way to predict the future

I recently read Allison Schrager’s book An Economist Walks Into A Brothel which took a different approach on what is and how to define risk. Schrager is a Ph.D. and retirement economist, She did not want to work in academia and instead researched risk and how it relates to retirement.

In her book, she describes how people try to reduce risk by creating some sort of certainty in a situation or event. They will look at lessons from the past that will be relevant in the future and predict events that are more likely to occur than others.

Schrager describes a financial model that movie producer Ryan Kavanaugh created for picking the most profitable films. The film industry is very unpredictable. Most movies lose money. The small amount of movies that do well cover the losers.

Kavanaugh had elaborate and complicated spreadsheets that he believed would increase the odds of investing in profitable films. From 2005-2006, he financed a total of 36 films, and he made money for his investors. However, eventually, his model stopped working.

He invested in a film that cost $42 million but only brought in $5.7 million. His losing streak continued, and his production company was bankrupt by 2016.

The inputs for his model were based upon the past. His risk model didn’t properly adjust for the fact that the movie industry and consumer viewing habits had changed. Most markets, whether they be a film or financial market, are continually evolving.

Investment Risk Takeaway: In order to reduce risk, one must be willing to change the inputs in their models and research. One must understand the fact that the world has and will continue to evolve. This fact reminded me of a quote from U.S. general Eric Shinseki, “If you dislike change, you’re going to dislike irrelevance even more.”

When offered choices, our attitudes towards risk change

Studies have shown that when we are offered similar choices, our attitudes towards risk change depending upon how the choices are offered.

Studies by psychologists Daniel Kahneman and Amos Tversky concluded that when people were confronted with the notion of a loss, they tended to be risk-seeking. However, when faced with the prospect of gains, people became more risk-averse.

This is because most people would rather accept a certain, but smaller gain, over the chance at a larger one. The basic need for certainty is likely in play here, too.

Investment Risk Takeaway: This may explain why annuity products are so popular among investors and retirees. Many of these products claim to offer a guaranteed rate of return without the volatility and downside of the stock market. If you can provide a guarantee for someone for a 3-5% return on their money without them seeing losses, most will take it because losses are felt twice as severely as gains. However, many academic studies show that the long-term rate of returns in the stock market is higher than those offered by most annuities. There is an opportunity cost of missing out on higher returns.

What may seem risky isn’t always so

The Action Network described some of the reasons for the recent success of Jeopardy champion James Holzhauer. His strategy involved starting at the bottom of the board (where the questions are worth more) and wagering his entire bankroll on the Daily Double questions.

Starting with the most challenging questions or risking your entire winnings sounds risky. This risky bet against conventional wisdom paid off handsomely for him. Holzhauer (who is a professional gambler) is answering about 96% of the questions correctly on the show. He understands those numbers when betting.

Investment Risk Takeaway: Understanding probabilities and odds is essential in risk management. This can reduce risk in certain situations and make what seems like a risky proposition, not as risky.

We know that it isn't possible to have perfect information or models. We try our best to be flexible in our thinking, understand our client’s needs, their behaviors and expectations.

Knowing our customers and their risk tolerance helps increase the odds of building portfolios and financial plans that not only meet their needs but are done with the acceptable amount of risk.

As Walt Disney once said, “Dream, diversify and never miss an angle.”