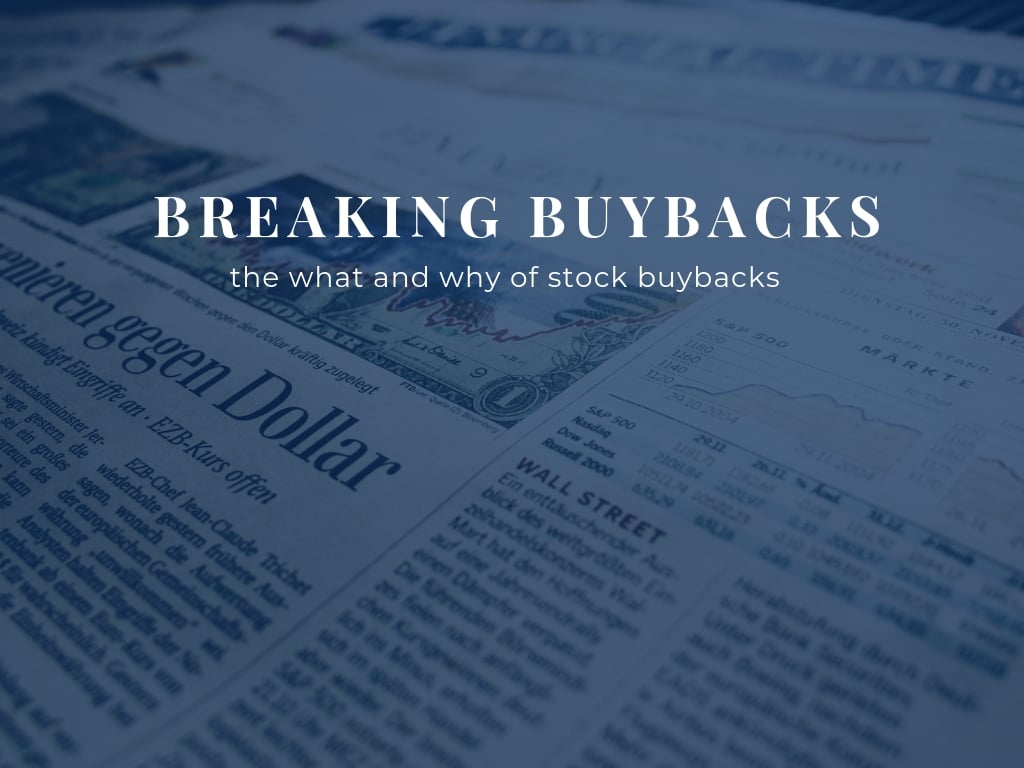 Recently, you’ve probably heard much noise about new congressional proposals regarding stock buybacks. Before I get into the nitty-gritty, it is probably good for a quick refresher on the what and why of stock buybacks.

What are stock buybacks?

Stock buybacks are when a publicly traded corporation purchases their own shares in the public markets. They announce either the dollar or share amounts they will repurchase and it is to the discretion of the Board of Directors and management to determine this amount and when to make such purchases. The cheaper companies can buy their stock back, the more they can repurchase.  Corporations are known for poorly timing their share repurchases as indicated in the chart below where repurchases hit a low in 2008-2009 as stock prices were near generational lows in the Great Recession: 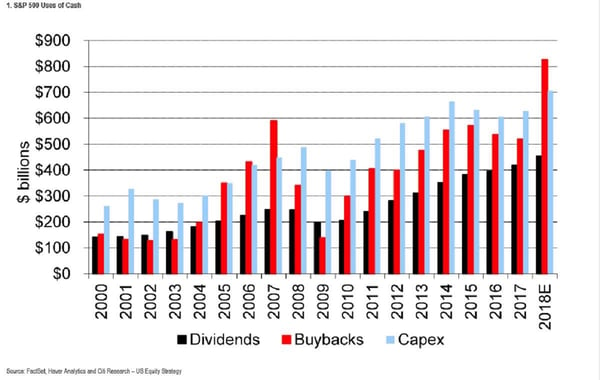 Why do companies buyback their own stock?

A corporation has five main uses of capital: pay down debt, make acquisitions, invest in the business, pay a dividend or buyback it's stock. A corporation, in theory, should repurchase their shares if they believe they are undervalued and present the best rate of return for its stakeholders. The best-performing companies know how to allocate capital between these five choices best.

Other times, corporations will repurchase stock to offset the dilution from exercised stock options that are issued to executives and employees. This is typically referred to as the “option creep”.

What are the benefits of stock buybacks?

If a company is decreasing the total amount of shares available, that means the total profits per share of the remaining shareholders are higher. This should lead to a higher stock price but isn’t always guaranteed. There are indexes that track companies that repurchase their shares and one such index is the S&P 500 Buyback Index. This index tracks the performance of the top 100 stocks with the highest buyback ratio (dollar amount paid for shares in the last year divided by the total value of the company). The chart below shows the 20-year performance of this index (in turquoise) vs. the S&P 500 (in white): 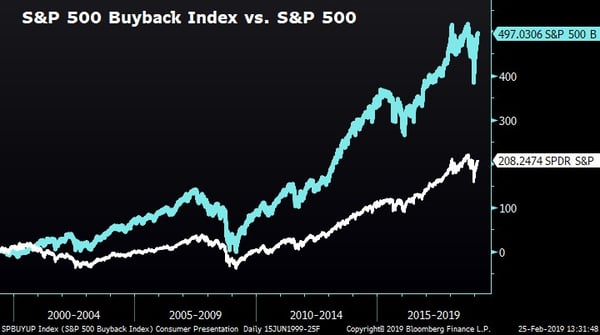 As you can see, the Buyback Index has done very well over this. However, that does not mean it will continue to do as well in the future.

What are the legislative proposals for restricting stock buybacks?

Senators Chuck Schumer and Bernie Sanders wrote an op-ed in the New York Times last month detailing their thoughts and plans for curbing share buybacks. They make the argument that 53% of profits from 2008-2017 went to share buybacks, and that large companies like Wells Fargo and Harley Davidson are spending billions repurchasing their shares while at the same time laying off thousands of employees. Their proposed bill “… will prohibit a corporation from buying back its own stock unless it invests in workers and communities first, including things like paying all workers at least $15 an hour, providing seven days of paid sick leave, and offering decent pensions and more reliable health benefits.”

Another proposal comes from Senator Marco Rubio in which share buybacks would be taxed more aggressively while allowing companies to immediately and fully deduct the cost of new investments. Both proposals want to level the playing field for workers, incentivize companies to invest in capital and equipment but at the potential expense of shareholders.

Are buybacks the problem?

I don’t think anyone is against corporations treating their employees fairly, but at the same time, public companies have a legal fiduciary responsibility to do what is best for their shareholders. There could be a dangerous precedent set as you would incent companies to spend in areas (dividends, R&D and M&A) that may not be the most productive use of capital. The beauty of capitalism is that it is supposed to be a free market where businesses have the freedom to operate and be creative in whatever product or service they sell. Think of Jeff Bezos starting Amazon.com in his garage 24 years ago. He changed the way we shop and created hundreds of thousands of jobs in the meantime.

On the other hand, corporations can become inefficient, go by the wayside or become acquired, which results in job losses. It doesn’t look good when the CEO of a company gets a multi-million dollar pay package while the average employee is let go and doesn’t know where their next paycheck will come from, but this is capitalism.

Ritholtz Wealth Management CEO, Josh Brown, astutely pointed out a few weeks ago that in the 1990s many corporations invested heavily in telecom infrastructure that mostly fizzled and resulted in bankruptcies and job losses. Studies have shown that large mergers mostly destroy shareholder value. You often hear the word “synergy” associated with a big acquisition, and this is essentially a code word for “layoffs”.  Forcing companies into making a specific decision with their capital can have unintended consequences.

What can be done?

Targeting stock buybacks is probably a good way to get the attention of disenfranchised voters who have not reaped the benefits of the stock market. As Schumer and Sanders note, about 85% of all stocks owned by Americans belong to the wealthiest 10% of households. Maybe the problem isn’t stock buybacks but the fact that many Americans don’t have the opportunity or means to invest. I’ve previously written how under-invested the Millennial generation is, and that we could encourage stock market participation by:

The more participants we have in the stock market, the better off we all will be in benefiting from the growth of corporations worldwide, whether it be from dividends, M&A or stock buybacks.