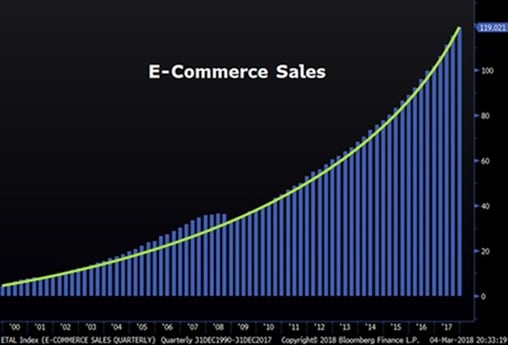 We all know that technology and the rise of the Millennials are changing consumer behavior like never before. One result is that e-commerce continues to grow. I thought it would be interesting to share (below) a chart of e-commerce sales, which are still a fraction of total retail sales. As you can see, this has been a logarithmically growing trend, and is in the accelerating part of the disruption “S-curve” – I certainly would not want to fight this trend. Read More: U.S. e-commerce sales grow 16% in 2017

Is the Rental Market Cooling off? We all know that urban rental markets across the country have been very strong, and Cleveland is no exception.  I have been told that about 2,000 people are on waiting lists in downtown Cleveland alone.  As anyone who knows me is aware, my son and I like to tour old buildings, so last week we were thrilled to go on a tour of several new housing/office projects taking place in Cleveland.  It is amazing how much residential space has come online in the last few years and even more remarkable how much is planned and under construction.  RELATED:  Cleveland Apartments Rising at Insane Rate

On our tour, we had a behind-the-scenes look at four new projects, only one of which was finished.  The unit we toured in the finished project was being rented out as an AirBnb.  The second project was a relatively small apartment building; the owners were a group of basketball players from a different city who had invested in this building and were rehabbing it.  The third project was a repurposing of a large warehouse space into residential.  The owner told me that this project had never been viable until now and that this was the first project of this kind that they had done.  The last project was a huge 21-story former office building built in 1925.  Again the owner of this building told me that they usually do commercial work and that this was their first venture into residential.

My observation here is that all of these buildings are being done by new entrants into the market.  As excited as I am to see all this new construction and to see my city grow, I cannot help but wonder if we are starting to get into “bubble” territory.  It is often a sign of a bubble when there are new unexperienced speculators entering the market.  Apparently, Cleveland is still near 100% occupancy, but with multiple huge projects coming online in the next couple of years, it will be interesting to see if we can sustain this growth.   WATCH:  Rental Prices Showing Signs of Decline